Interview with Dawn Chen on “From the Ghost of Ash Monroe”

Hey, everyone! It’s been a super long time since I last did a New Author Spotlight segment on my blog- almost a year! But, now that I’m on summer break, I’m ready to get back into this super exciting portion of my blog. Once again, if you are a new author or are working on a work in progress story (WIP), feel free to contact me so we can try to set up an interview!

The second person I interviewed for the segment is my good friend from Bookstagram, Dawn! We have been friends for a while now, and I have always been so in awe of her beautiful pictures and intrigued by her WIP. Check her out on Instagram: @/dawn.writesstuff! She discusses her WIP, From the Ghost of Ash Monroe.

What is your book called, and what genre is it?

The name of the WIP is called From the Ghost of Ash Monroe. It’s a young adult urban fantasy.

What is the synopsis/premise of your story?

Where are you in the writing process, and what are your future plans for From the Ghost of Ash Monroe?

I’m editing for now. I’m also writing a sequel about another character in the story and I’m trying to make the plot more consistent between the two books. I think after I make the stories make sense I’ll start querying and maybe one day even traditionally publish it.

Which character from your WIP do you relate to the most, and why?

Probably the woman who is possessed by the entity and giving unprofessional therapy despite her needing therapy herself! I kind of dumped a lot of my own issues onto her.

Which books did you take inspiration from when writing From the Ghost of Ash Monroe?

It’s hard to say because, to be honest, all the books about ghosts serve some kind of inspiration! The ones I can think of off the top of my head are Ghost Wood Song, Elatsoe, and the City of Ghost series by V.E. Schwab. Also any of Neil Gaiman’s books, especially the Sandman comics, Good Omens, and Neverwhere kind of influenced my writing a lot.

Why do you think readers will like and connect with this book?

I kind of wrote the story as a coping mechanism during the worst of the COVID pandemic. I was struggling with mental health and had a lot to grieve. I also had hurt people I was very close to. So, I wanted to write a ghost story where the ghost isn’t just despair and unending rage, instead just a person who has a lot of complicated emotions/stuff to work through and that haunting isn’t just an irrational force of nature, instead is born out of confusion and is caused by pain instead of malicious intentions. But it’s also a story about characters who are struggling with their own morality and mistakes in the past and present, and how ugly grief can make us but also how we can grow from it.

What is something special about your book that you believe makes it stand out from other stories?

I’d love to think I played a lot with tropes in books about haunting, possession, and ghosts. Or at least added some of my own flavor on top of it. I also would like to think that the story doesn’t really read like there is a main villain or hero, since I try to keep the story with a smaller scale and simply about different people interacting with each other and how to cope with life in general.

How has joining Bookstagram impacted your WIP and your experience being a writer?

I think Bookstagram helped to give me a platform to talk about my writing, and people here are so supportive that it makes me feel like I should keep on writing the story even though sometimes I feel like it’s not good enough to ever see the world. Also, just reading books and talking about them in general taught me a lot about writing. Without the Bookstagram community, writing a story feels very much like one person against the world.

It’s chaotic, to say the least! I finished the first ⅔ of the book’s first draft in like 3 months, and then the last ⅓ a year later. And now it’s been sitting around in the editing loop for about 2 years now, and doesn’t seem to be ending anytime soon!

What advice do you have for aspiring authors?

I’m bad at giving advice, but I think that writing makes me realize that advice on writing is very subjective. I think there is literally no objective good writing or good book. As long as the book isn’t problematic or harmful, people should write however they want. There is always someone out there who would love to read a writer’s writing.

What are some of your other hobbies?

I love drawing and share a lot of my art on Instagram stories. Also, I’m really into movies and TV shows. I also love to walk in parks and swim.

What is your favorite book of all time, and why?

Last Night at the Telegraph Club- the Chinese sapphic representation in the main character is just one I relate to the most of all, and the love interest is still probably my favorite in all of fiction. Also, the ending is still one that is unbeatable in its impact.

Yeah! My WIP has a full LGBTQ+ cast and everyone is a mess! So, if anyone is into disaster characters who are queer, then they might enjoy the book. It’s kind of like a mixed mash-up of the Supernatural TV show with Alice Oseman-esque characters. 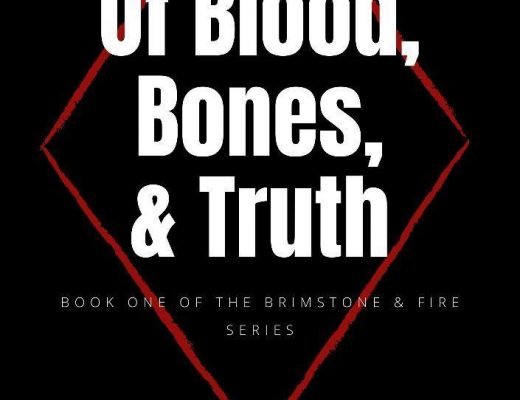 Interview with Tia M. Ledvina on Of Blood , Bones, and Truth